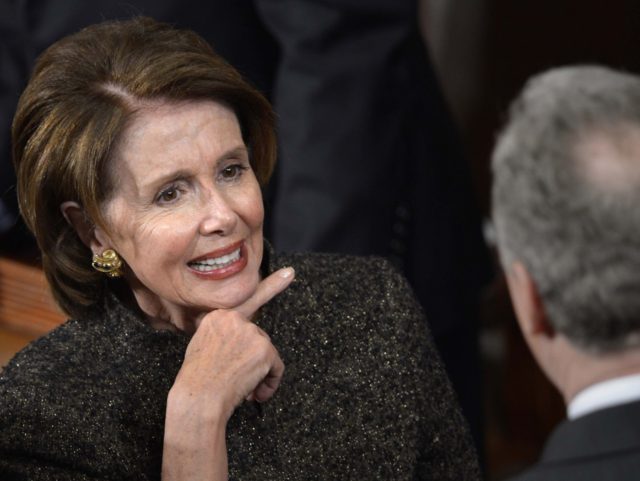 Speaker Nancy Pelosi and the Democrats just stepped in it, big-time.

According to various news reports, Pelosi has “disinvited” President Trump from making the annual State of the Union address to Congress.

With just days left until he was supposed to deliver this widely-viewed speech on January 29, Politico reports that, fearing Trump will use the nationally-televised address to blame Democrats for the ongoing partial shutdown of the government, Pelosi “asked President Donald Trump to reschedule his State of the Union address — or deliver it in writing — as long as the government remains shut down.”

Pelosi’s pretext is “security concerns,” but even the far-left Politico is forced to admit that is not Pelosi’s real worry.

“[P]rivately,” Politico says, “Democrats also don’t want to give Trump a major platform to blame them for the shutdown when Trump’s demand for billions in wall funding has been the main driver, according to a Democratic lawmaker close to leadership.”

What’s more, NBC News is reporting that the speech has not merely been “postponed”: Trump has been straight-up “disinvited” from making the address.

Every year, per a tradition that reaches back to the early 20th century, and at the invitation of Congress, the president addresses the Congress on the state of the union.

This tradition also, of course, gives Congress the power to not invite the president, or to revoke the invitation, which is what Pelosi is doing.

Obviously, the Democrat leadership have not gamed this out, because what they are actually offering Trump is an extraordinary opportunity, one that allows him to burnish his legacy with the creation of a presidential precedent: a State of the Union address delivered directly to everyday Americans.

On top of the fact that Pelosi is acting petty and small, there is nothing stopping Trump now from giving his January 29 address elsewhere — like, say, an arena in a swing state.

Trump’s constitutional obligation as president periodically to “give to the Congress Information of the State of the Union, and recommend to their Consideration such measures as he shall judge necessary and expedient,” does not require a speech before Congress, or any kind of speech. Between 1801 and 1913, the president addressed the Congress by writing a letter.

So what we have here is Pelosi and her petty Democrats unshackling an iconoclastic president from this stuffy tradition, which allows him to create one of his own…

If Trump is smart, he will grab this historic opportunity with both hands and make the most of it.

Imagine if the annual State of the Union was delivered to We The People, as opposed to the elite ruling class.

Imagine if Trump and his successors were able to escape the DC swamp, the visuals of the opposing party sitting on its hands, and move this important tradition into America’s heartland.

Trump has already delivered two State of the Union addresses, and both were very well received, even by a media that loathes him. This is a solemn and serious thing, and should remain so.

On another front, Pelosi just ceded even more congressional authority to the executive branch.

Until now, the State of the Union was something the president did for Congress at the request of Congress; a custom where the president deferred to Congress.

And here is Pelosi, giving a president like the Trump the open opportunity to upend all of that.

The people want to hear from their president. Once a year, we want a serious, in-depth speech from the commander-in-chief, and the viewership numbers prove that.

This is a tradition Americans appreciate, and if Democrats want their historical precedent to be the first time congressional leadership has ever played politics with the State of the Union, Trump can set his own precedent by bringing that message directly to the people.