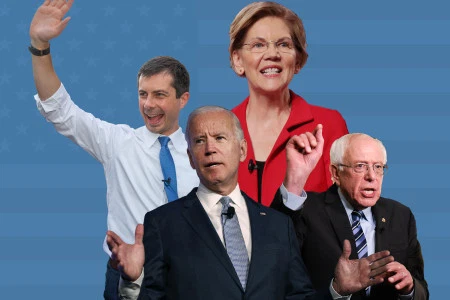 True moderate Democrats have become the political lost tribe, a group that is now aggressively despised by the socialist D.C. elites who constantly hurl an endless stream of negative attacks and accusations against them.

Today’s Democrat Party is a mess of divisiveness, anti-Americanism, and anti-Trumpism that has left it a party without substance, direction, or legitimate future.

…I’m going to remember 2019 as the Democrats’ last stand. The party of Thomas Jefferson was given the keys to the nation’s future and told, simply, don’t drive it off the road. Instead, the Democrats honored their Southern roots and decided to go mud bogging! Might have been fun if they had four-wheel drive, but they were stuck with the antique transmission of the Constitution. Voters were sure to notice when the yee-haw Democrats covered them with dirt, ground the gears to dust, and spun the engine into oblivion.

But just in case you’ve forgotten, here’s the roadmap of how we got here:

Jan. 3: Democrats took over the Animal House of Representatives and immediately pledged to take down President Trump in the mistaken belief that he is really Dean Vernon Wormer. Nancy Pelosi auditioned for the role of chapter president, but was told she was born to play the John Belushi part of “Bluto,” the pathological sergeant-at-arms. That big nasty gavel sure does make power go to one’s head — and you don’t have to be a good ol’ boy to understand that!

Jan. 15: An apparent messiah complex leads Sen. Kirsten Gillibrand to join dozens (hundreds?) of other Democrats offering themselves as the Chosen One to defeat DJT. Political spin doctors warn that the delusion could spread rapidly and, indeed, before the year is half over, it has infected Jay Inslee, Marianne Williamson, John Hickenlooper, Beto O’Rourke, Bill de Blasio, Julian Castro, Steve Bullock and other non-entities. It appears, however, that although non-politicians were for the most part immune, a related condition resulted in uncontrollable laughter whenever two or three people gathered to discuss the state of the Democratic primary.

Jan. 29: Democrats encountered a detour on their road to ruin when “Empire” actor Jussie Smollett claimed to be the victim of a hate crime on the streets of Chicago in the middle of the coldest night of the year. The noose still hanging around his neck when police came to his door later may have seemed like the perfect prop to TV star Smollett, but to everyone else it seemed like a giant neon light shouting, “Give me attention!” Did I say everyone? Oops. Not Democrats, who have mastered the marriage of victimhood and hagiography. To them, St. Jussie was the second coming of Tawana Brawley. Oh, wait. This is getting way too uncomfortable! It’s almost like Democrats specialize in phony attacks and disingenuous outrage. Hmmm. On Feb. 21, Smollett was arrested for filing a false police report, but thanks to a corrupt system in Chicago, he walked away without even a slap on the wrist for his staged hate crime. Did I mention Chicago?

March 22: I know Democrats thought that Robert Mueller was the Easter Bunny, but when he delivered his report on Trump and Russia, it turned out to be a big goose egg. Attorney General Bill Barr tried to warn the nation that there was “no there there,” but we didn’t know he was talking about the space between Mueller’s ears until July 24 when the special counsel testified before the House Judiciary Committee. Turned out that Mueller doesn’t even recognize the name of Fusion GPS, the company that hired Christopher Steele to write the dossier that was behind the entire phony Trump-Russia collusion conspiracy sham. Case closed. But the Democrat conspiracy elves cobbled together a new hoax that was ready to go 24 hours later — the Ukrainian extortion quid pro quo bribery scandal. This time, surely it would be the beginning of the end for that impostor president!

March 25: CNN’s preferred candidate for president, porn-star lawyer Michael Avenatti, is arrested for a real extortion scheme he allegedly plotted against Nike. Over the next month, Avenatti, the darling of the Never Trumpers, would be indicted and charged with north of 40 federal crimes. The presidency would have to wait for a better con man.

April 25: Enter Joe Biden. Ignoring former boss Barack Obama’s wise counsel that “You don’t have to do this, Joe,” Biden commits professional suicide by announcing his candidacy for president, thus ensuring he will leap from comfortable irrelevancy to irrelevant corrupt con-man politician who will eventually have to answer for his bragging about a quid pro quo in Ukraine. Talk about poetic justice!

May 3: Unemployment falls to 3.6% in the United States, the lowest in 49 years. By October, it is down to 3.5%, setting the 50-year record, and jobless numbers for blacks, Latinos and other minorities are at all-time lows. Nor surprisingly, the Democrats blame Trump for the horrible economy because — well — there was nothing else they could do.

June 27: Wait, there actually was something else the Democrats could do. All 10 Democrat candidates in the first presidential primary debate on NBC raised their hands when asked if they would guarantee health-care coverage for illegal aliens. Democrats swooned, but the rest of us just felt sick.

Aug. 24: At their summer convention in San Francisco, the Democrats voted against holding a climate-change presidential debate. Three days later, 16-year-old climate phenom Greta Thunberg arrived in New York City propelled only by her own hot air across the Atlantic from her native Sweden. Told she is too early to appear as a teenage blimp in the Macy’s Thanksgiving Day Parade, she decides instead to testify at the U.N. on gaseous emissions, of which she has become an expert. Somehow she never gets around to telling the Democrats what she thinks about their decision to sidetrack the climate debate. How dare they!

Sept. 3: The San Francisco Board of Supervisors passes a resolution calling the National Rifle Association a “domestic terrorist organization.” In response, the NRA passes its own resolution calling the San Francisco Board of Supervisors “a lime Jell-O salad with marshmallows.” At least that’s what I think they did. Reporting on this is somewhat vague.

Sept. 8: Disgraced former South Carolina Gov. Mark Sanford announces his primary challenge to President Trump. As part of his doomed bid for attention, Sanford simultaneously announces he will be departing the race on Nov. 12, but because he is not wearing a noose around his neck, the media misses the story altogether.

Sept. 9: The inspector general of the intelligence community, Michael Atkinson, draws the short straw and is forced to launch a third unsuccessful coup attempt against President Trump by the CIA involving the “urgent” and “credible” whistleblower complaint that turned out to be “irrelevant” and “partisan” a few days later when President Trump released the consensus transcript of his call with Ukraine President Volodymyr Zelensky. When will they ever learn? Oh, well, after Trump is reelected, they will have four more years to get their impeachment-coup machine in working order. If at first you fail to smear, try, try again.

Sept. 20: New York City Mayor Bill de Blasio announces his withdrawal from the presidential race. New Yorkers tremble in fear at the prospect of his return to work.

Sept. 24: In a legacy-building move, Nancy Pelosi announces she will go after the Guinness Book of World Records title for shortest successful impeachment proceeding in history. In a surprise, she also added a last-minute bid to win the title for the impeachment with the least evidence, and Guinness decided to award her that one summarily. As one Guinness judge was overheard to remark about Trump’s call with President Zelensky, “That was a perfect call. How the hell does she impeach with that call? Damn, she’s good.”

Then, in a shocking turn of events, the entire fourth quarter of 2019 was canceled on account of impeachment. Speaker Pelosi, who had been holding the nation hostage since September, is expected to free the impeachment sometime early in 2020, but the nation itself will remain a prisoner throughout most of the year as Pelosi and her henchmen in the media continue to pretend that the other shoe is about to drop, leading to a bombshell revelation that this is the beginning of the end of President Trump, who will nonetheless breeze to reelection on his pledge to Keep America Great and to keep the socialist Democrats at bay.