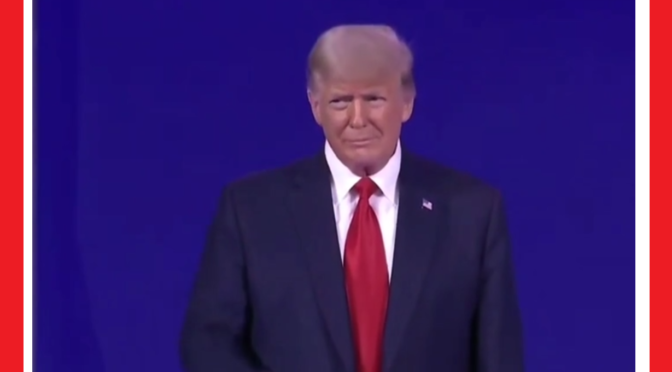 The firings came two days after the Republican-majority Senate acquitted US president of charges of abuse of power.

Firings come two days after the Republican-majority Senate acquitted the US president of charges of abuse of power. 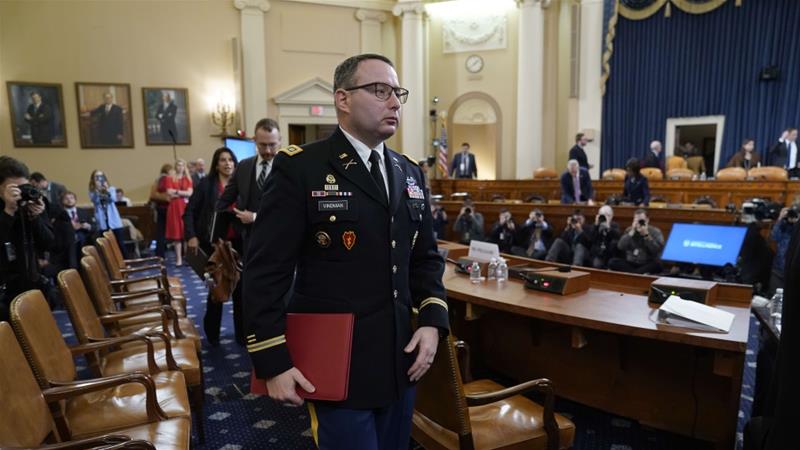 Vindman was reportedly escorted out of the White House, where he had worked on the National Security Council [File: Win McNamee/Getty Images/AFP]

US President Donald Trump has fired two of the highest-profile witnesses in his impeachment probe, sparking accusations that he is on a campaign of revenge.

Trump recalled his ambassador to the European Union, Gordon Sondland, just hours after Lieutenant Colonel Alexander Vindman, a decorated soldier who worked at the National Security Council, was ordered out of the White House on Friday.

Vindman’s twin brother Yevgeny, also a lieutenant colonel who worked as an attorney in the NSC, was fired simultaneously, US media reported.

The firings came two days after the Republican-majority Senate acquitted Trump of charges that he abused his office and one day after he gave a victory speech branding his opponents as “evil”.

Sondland, a political appointee who got his post after donating $1m to Trump’s inauguration, said in a brief statement, “I was advised today that the president intends to recall me effective immediately.”

The ouster of Vindman, a respected officer who was wounded in Iraq, was even more abrupt, when he was ordered out of his NSC offices at the White House.

Vindman was escorted out of the White House, where he had worked on the National Security Council (NSC), lawyer David Pressman said in a statement, adding that the move was retribution for Vindman’s testimony.

“There is no question in the mind of any American why this man’s job is over, why this country now has one less soldier serving it at the White House. LTC Vindman was asked to leave for telling the truth,” Pressman said.

Trump has described the impeachment process as a hoax, denying there was anything wrong in his push for Ukraine to open a politically embarrassing investigation into Democratic presidential candidate Joe Biden’s family.

Vindman testified to the US House of Representatives impeachment inquiry in November that Trump made an improper demand of Ukrainian President Volodymyr Zelenskyy in a July phone call that became the centrepiece of the probe of the Republican president.

Vindman told a Democratic-run committee “I couldn’t believe what I was hearing” in the phone call. Trump asked Zelenskyy to launch investigations into both Democratic rival Joe Biden and a widely debunked conspiracy theory that Ukraine, not Russia, was behind meddling in the 2016 US presidential election.

In that appearance, Vindman also downplayed concerns that he would suffer payback for speaking out. “I will be fine for telling the truth,” he said.

Trump emerged victorious from his trial this week with a vote in the Senate, controlled by fellow Republicans who rejected abuse of power and obstruction of justice charges against him.

Asked earlier on Friday about media reports that he might remove Vindman, Trump told reporters: “I’m not happy with him. You think I’m supposed to be happy with him? … They’re going to be making that decision.”

A source familiar with the situation told Reuters news agency that Vindman would be reassigned to the US Department of Defense.

Vindman’s two-year stint at the White House was due to end in July. 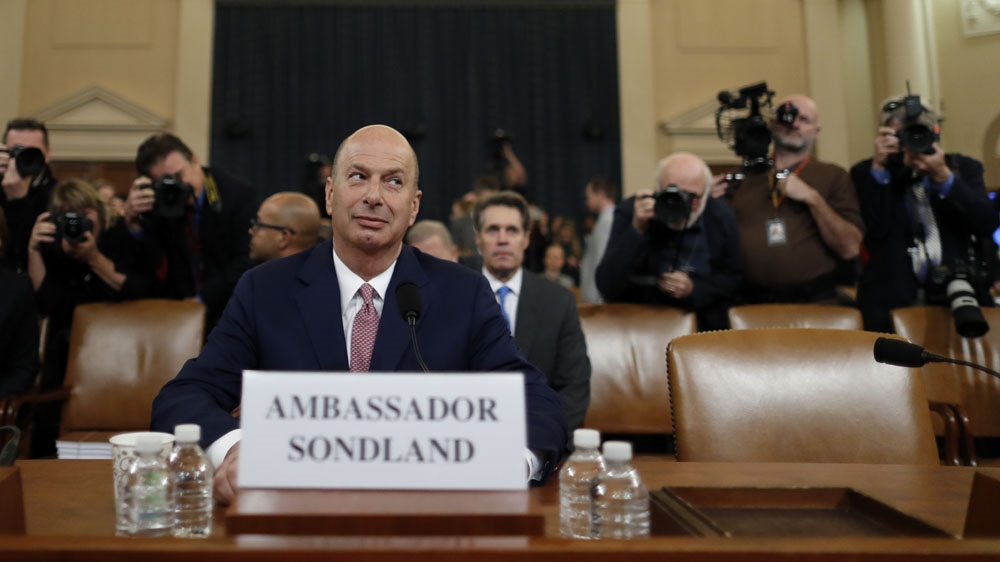 Sondland, a political appointee who got his post after donating $1m to Trump’s inauguration, had testified that Trump had sought a ‘quid pro quo’ deal with Ukraine to investigate former Vice President Joseph Biden and his son [File: Andrew Harnik/AP]

For his part, Sondland told lawmakers he followed the president’s orders in seeking a “quid pro quo” deal for Ukraine to investigate Biden in exchange for getting Zelensky a coveted White House visit.

Sondland said Trump’s personal lawyer Rudy Giuliani led the effort at Trump’s direction to pressure Zelensky for the investigation and that top officials in the White House and State Department knew about it.

That testimony helped build the case leading to Trump becoming only the third president ever impeached by Congress, before his acquittal this week.

Another senior White House aide who testified during impeachment proceedings, Jennifer Williams, left this week for a post at the US military’s Central Command, according to Bloomberg News.

Trump has cast both Vindman and Williams as “Never Trumpers” who oppose him.

In a social media post, Democratic Senator Ron Wyden said the firings were “petty retaliation” carried out “for telling the truth.”


US Ambassador to the European Union Gordon Sondland testifies during the House Intelligence Committee hearing as part of the impeachment inquiry into US President Donald Trump on Capitol Hill in Washington, DC on Nov. 20, 2019. (Olivier Douliery/AFP via Getty Images) Politics

Gordon Sondland, who served as the U.S. Ambassador to the European Union, issued a statement late Friday saying that President Donald Trump is set to recall him from the role.

“I was advised today that the President intends to recall me effective immediately as United States Ambassador to the European Union,” Sondland said in a statement issued via his attorney.

“I am grateful to President Trump for having given me the opportunity to serve, to Secretary Pompeo for his consistent support, and to the exceptional and decimated professionals at the U.S. Mission to the European Union,” he added. “I am proud of our accomplishments. Our work here has been the highlight of my career.”

The Epoch Times has contacted the White House for comment.

Sondland’s statement was released shortly after Lt. Col. Alexander Vindman’s lawyer said that Vindman was fired by the White House.

Both Vindman and Sondland testified in the Democrat-led House of Representatives’ impeachment inquiry against President Trump.

The Senate voted to acquit Trump on Wednesday, Feb. 5, of the two charges of abuse of power and obstruction of justice, ending the third impeachment trial in U.S. history.

The Democrat-led House voted along party lines to impeach Trump on Dec. 18 after an impeachment inquiry that lasted for months. House Democrats who sought Trump’s impeachment claimed that the president withheld millions of dollars to Ukraine in exchange for investigations.

Sondland, at the House impeachment hearing in November 2019, confirmed that he never heard directly from Trump about a quid pro quo that connected military aid for Ukraine in exchange for investigations into corruption, saying “I never heard from President Trump that aid was conditioned on an announcement of [investigations].”

But Sondland also said at the hearing that “we all understood” that a meeting at the White House for Ukraine’s president was conditioned on an investigation or a statement announcing investigations.

“Everyone was in the loop,” Sondland said at the hearing. “It was no secret.” He added, “Was there a ‘quid pro quo? The answer is yes.”

Sondland also said that he received no direct orders or much communication from Trump himself but that he was acting on behalf of Rudy Giuliani, Trump’s personal attorney. Giuliani denied that assertion.

Trump, Ukrainian officials, and other White House officials at the time categorically denied the allegations of bribery and quid pro quo.

When Republican lawmakers pressed Sondland at the November hearing, he admitted that no one had told him about investigations and relied only on presumptions that he had made.